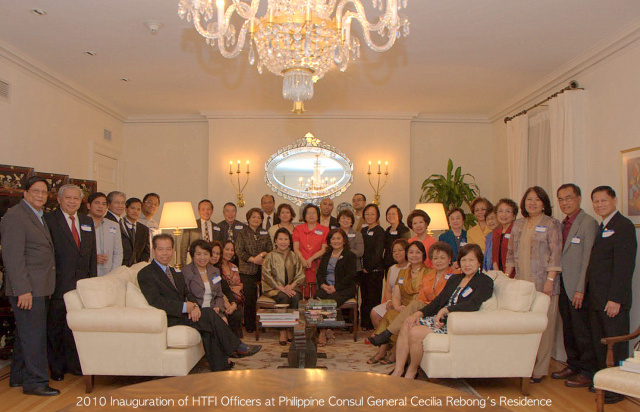 The Philippines lies in the path of typhoons and earthquakes in Southeast Asia.  Annually, the country is visited by numerous typhoons resulting in catastrophes i.e., mudslide in the Northeastern provinces in the big island of Luzon and floods in the Metro Manila area, and many more calamities.  Lakad Tulong, an ad hoc entity, was formed in response to the devastation wrought by typhoon Frank, when a group of community leaders in the Tri-State area, in cooperation with the Philippine Consulate General in New York, banded together and raised funds to help the victims of this typhoon in 2008.   Because the fund-raising effort was started as a reaction to the disaster, funds took time to be raised and sending the aid to the Philippines even took longer. Nonetheless, the outcome was so successful. As an offshoot of this experience, the community felt it necessary to be proactive instead of being reactive. This led to the decision to establish a foundation solely dedicated to raise “ready” funds to help in a heartbeat, those affected by future devastating natural calamities. Thus, Handang Tumulong Foundation, Inc. (HTFI) was born in 2009. Sixteen (16) charter founding members were signatories to the incorporation papers.  It was on January 10, 2010 when HTFI was formally and legally incorporated in the State of New Jersey.  HTFI was granted by the Internal Revenue Service a 501(c) (3) non-profit status with Tax ID# 27-1805860 on February 1, 2010.  The primary purpose of the organization is to raise funds for the needy and victims of natural disasters and catastrophes anywhere around the world, especially in the Philippines.  The foundation is a public entity, and has been successfully raising ready funds to date, which enabled it to send immediate relief, monetary and in kind, in the most expeditious manner.  HTFI has lived up to its name – ready to help when it is much needed.

Handang Tumulong Foundation, Inc. is registered as a charity organization in New Jersey with the tax-exempt organization number 271-805-860/000.  To raise funds, two major events are held annually.   The first is a cultural event, usually held the first quarter of the year.  The second major source of funds is the walkathon, aptly called “Lakad Tulong” held in October.  The walkathon, which started in 2009, has become the signature event of HTFI.  For every event, corporate sponsors as well as media sponsors are sought.  Letters of appeal seeking donation are likewise implemented.  All these fund-raising activities have netted enough revenue to allow HTFI to send monetary assistance to the victims at a moment’s notice.   HTFI has established a dedicated corps of volunteers and donors, such as the Central New Jersey Fil-Am Tennis Club, the Filipino Group of the UN, Filipino American Association of Fair Lawn, the Federation of Filipino American Society in New Jersey, the Marriott Hotel, to name a few.  A sizable number of private individuals have also sent in donations, in response to HTFI ‘s appeal for help.  Some are in large sum, the rest are within the budget of a typical charitably inclined individuals, but always, their accompanying notes speak of their heartfelt desire to be part of an effort to help those suffering from catastrophes back home or elsewhere, no matter how little the sum is.

MECHANICS OF DISTRIBUTION OF FUNDS:

PAST, CURRENT AND FUTURE FUND-RAISING EVENTS: